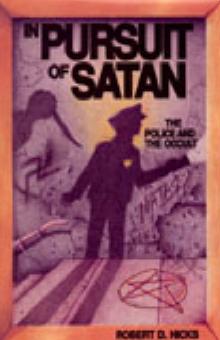 In Pursuit of Satan

The Police and the Occult

Mutilated animals. Defaced tombstones. Sexual abuse in daycare centers. Is America threatened by a satanic conspiracy? In this book, Robert D. Hicks exposes law enforcement's obsessive preoccupation with satanism as a model for criminal behavior. While satanic belief has played a part in crimes ranging from petty vandalism to serial murders, Hicks avows that there is no substantial evidence for the existence of a nationwide satanic crime continuum.

Hicks points out that the satanic criminal model is expedient largely due to its simplicity and economy, reducing to simple formulas such complex problems as drug abuse, teen suicide, and sexual molestation. His research utilizes a unique blend of law-enforcement methodology, anthropology, folklore, history, sociology, psychology and psychiatry. He attributes the cult conspiracy theory to beliefs fueled by Christian fundamentalist sects and to the ungovernable mechanisms of rumor-panics, subversive mythology, and urban legend.

In Pursuit of Satan documents examples of rumor-panics in which the police have fomented fear by attributing crimes to satanists, indulging in sheer speculation and promulgating misinformation through the sensationalist news media. Hicks examines the construction of the satanic ideology among law enforcement officials, focusing on the exploitation of satanism as a new scapegoat for public fears and addressing the phenomenon of credulity among police forces and allied professionals in social work, psychiatry, and psychology.