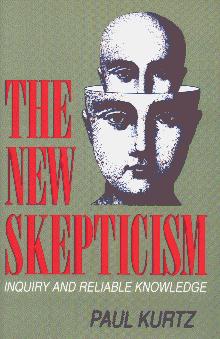 In this provocative book, philosopher Paul Kurtz, one of the world's leading skeptics, explores the dimensions of the "new skepticism", which he labels "skeptical inquiry".

An outgrowth of pragmatism, skeptical inquiry differs from earlier forms of skepticism, Kurtz argues, because its motiviation is inquiry rather than doubt. Thus the new skepticism is constructive rather than negative.

Part 1 is a historical review starting with the classical skepticism of the Sophists, Pyrrhonists, Carneades and others. The beginnings of modern skepticism are then traced back to the Renaissance and the Reformation, and thinkers such as Descartes and Hume. The historical survey concludes with a look at the pragmatism of Peirce, Dewey, Hook and Rorty and its postmodernist critics. Kurtz thus paves the way for consideration of skeptical inquiry - "a new, more meaningful and justifiable skepticism."

In Part 2, "Inquiry and Objectivity," Kurtz critiques the nihilistic and mitigated forms of classical skepticism and the "ego-centric predicament." He argues that classical skepticism is no longer viable, given the development of reliable knowledge in many fields of human inquiry. He also maintains that there are objective criteria for testing knowledge claims, and these are often effective in ordinary life as they are in the sciences. He asks, "Should we not suspend judgment about beliefs for which there is neither sufficient evidence nor adequate reasons?"

In Part 3, "The Paranormal, Religion, and Fantasy," Kurtz discusses the psychology of belief. He finds that both paranormal and theistic beliefs are based on pwerful human dispositions, including proclivity for fantasy and illusion.

In Part 4, "The Judgments of Practice", Kurtz demonstrates that skeptical inquiry can be applied to ethics and politics with positive results. He argues that scientific inquiry has already provided a reliable body of tested hypotheses and a cosmic outlook. Moreover, Kurtz points out, critical thinking can provide practical guidance to human action.

This book is sure to provoke controversy among skeptics and nonskeptics alike.

Paul Kurtz, professor emeritus of philosophy at the State University of New York at Buffalo, is chairman of the Committee for the Scientific Investigation of Claims of the Paranormal, editor of Free Inquiry magazine and co-president of the International Humanist and Ethics Union. He has authored or edited more than thirty books.